Driving Character on a Budget: Cool Cars Under $25k 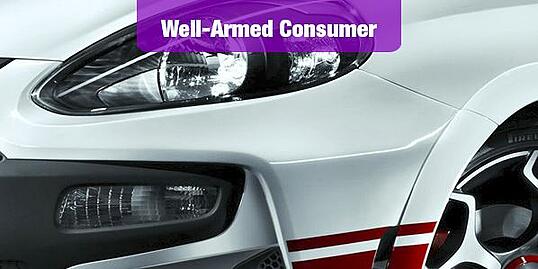 Kelley Blue Book compiled a list of the 10 coolest cars priced at under $25,000, with something for just about every taste and age bracket.

This sporty model features rear-wheel-drive, 200 h.p. and an available 6-speed manual transmission. It’s relatively svelte for a new car, at around 2,800 lbs., and Car and Driver states that it’s good for 0-60 sprints in around 6 seconds.

The Ford Fiesta ST is the Dearborn company’s entry in the “hot hatch” segment of the market. A list-price of $21,400 gets you a 197 horsepower Ecoboost engine and a 6-speed, wrapped in a sporty-looking body. Road & Track said they ran this little beast against some much pricier competition – including a Corvette Stingray and a Ferrari – and that the little Ford “...never got left behind.”

Very little needs to be said about this titan of the offroad set. It’s the standard by which other 4-wheelers are judged, and the new ones are certainly true to the Jeep heritage – even if they are a lot more civilized and drivable than their ancient, WWII-era forebears.

The S-model gets you a turbocharged, 189 h.p engine – which is a big upgrade from the standard offering. You’ll need it, too, since the Mini has gotten bigger – and a bit heavier – over its 10+-year run. But the new models handle better than the old ones, and offer better crash protection as well.

The Ford Mustang is the original Pony Car. As is the case with its main competitor, the Chevy Camaro, a budget of $25k keeps you in the base-model end of the range. A new Mustang is due next year, so you can expect to see some sweet deals on the 2014s – if you can wait until the later part of the year.  However, this 5th Generation model is no slouch, and the 2014 model is the most improved incarnation of it.

Just when we were wondering why there weren’t more Japanese cars on this list, along comes the Honda Civic Si. This is another “hot hatch” model that has been around for years, but with continual improvements. The 2014 model get a major refresh, with new styling and a small bump in power, to 205 h.p.

If you want something different, with Italian flair, this car is it. The Fiat 500 Abarth. Not to be confused with its cute, easy-to-park base model sibling, the Abarth comes complete with a turbocharged, 170 h.p engine and a 5-speed manual. It offers 0-60 times in under 7 seconds, and a 129 m.p.h top speed.

This is the only convertible on the list. However, it’s another venerable model that’s due for more than a facelift. There are plans for a Fiat/Mazda collaboration on an all-new Miata, but the current one has been around since 2008. It’s still a fine, little sports car, though, and a great value for the wind-in-the-hair set.

While everyone’s definition of “cool” is a bit different, KBB’s picks cover a wide range of tastes and driving styles. It’s good to know that so much performance and quality is still available for less than $25k.

If you are considering buying a car, download USC Credit Union's Auto Buyers Guide using the link below.


If you are using a screen reader or other auxiliary aid and are having problems using this website, please call
(877) 670-5860 for assistance.